How University of Phoenix Failed. It's a Long Story. But It's Important for the Future of Higher Education.

The failure of University of Phoenix (UoPX) is more than a dark moment in higher education history.  It should act as a lesson learned in the higher ed business. Executives at 2U, Guild Education, Coursera, Liberty University and Purdue University Global, Chegg, Academic Partnerships, Pearson PLC, Navient, Maximus and other for-profit and non-profit entities must take heed of the mistakes and the hubris of Phoenix, the wisdom of its cofounder John D. Murphy, and the silencing of important worker voices.
For several decades of the 20th century, hundreds of University of Phoenix campuses dotted the American landscape, conveniently located in cities and growing suburbs, off major highways. Founded in 1973, America's largest university became a for-profit darling of Wall Street in the 1980s and 1990s, and the provider of career education for mid-level managers in corporate America and public service. A Phoenix degree was the ticket to promotions and salary increases.
During its zenith, the school was backed by dozens of lawyers and DC lobbyists and a number of politicians and celebrities--including Nancy Pelosi, John McCain, Shaquille O'Neil, Al Sharpton, and Suze Orman. UoPX bought the naming rights to the Arizona Cardinals' pro football stadium in 2006. And in 2010, enrollment at the University of Phoenix stood at nearly a half million students.  The school even had an enormous presence at US military installations across the globe. University of Phoenix's presence was everywhere.*
Phoenix's stock rose for many reasons. It was a leader in educational innovation. It was convenient and affordable for upwardly social mobile workers.  Its profits were large, and its labor costs were relatively low because UoPX hired business leaders and experts in the field, not tenured scholars, to teach part-time.
But something went horribly wrong along the way.
In the 2010s, University faced government and media scrutiny for its questionable business practices, its declining graduation rates, and its part in creating billions in student loan debt. And when workers voiced their concerns, they were silenced in a variety of ways, from threats and intimidation to firings.
This enrollment collapse has now lasted a dozen years and counting.

Today, as a miniscule portion of Apollo Global Management's portfolio, UoPX's enrollment numbers are less than 100,000--and few of its physical campuses remain open during the Covid pandemic. It's not known how many campuses, if any, are financially viable.

University of Phoenix enrollment, 2009-2016 (Source: US Department of Education)
There are a several reasons why University of Phoenix is just a shadow of what it was. Businesspeople and lobbyists blame government regulation and oversight; others blame the relentless pursuit of quarterly profits and corrupt Apollo Group CEOs, including Todd Nelson.
Having talked to co-founder John D. Murphy and read his book Mission Forsaken, what I found out was that University of Phoenix began failing three decades earlier, during the Ronald Reagan era, when US companies chose to invest less in in their workforces.  When this post-Fordist shift happened, US companies reduced benefits for workers, and divested in the education and training of mid-level executives.
In order to keep the company growing in the face of this retrenchment, UoPX shifted its mission, from educating America's upwardly mobile workers to enrolling anyone--at any cost. The company could only decline as it preyed upon consumers and silenced its workers.   After 2010, enrollment counselors were signing up people who were woefully unprepared academically and financially for college work.
By 2014, about 1 million University of Phoenix's alumni were saddled with more than $35 billion in student loan debt. 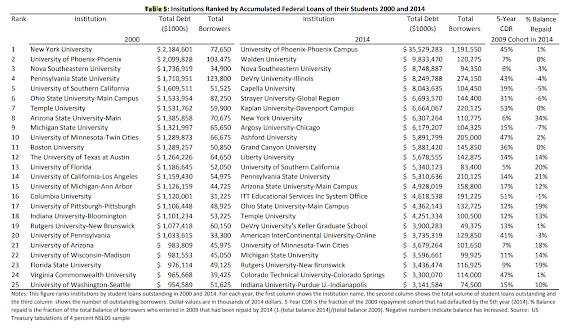 US Student Loan Debt by Institution (Source: Brookings, Looney and Yannelis, 2015)
In 2017, Apollo Group sold the company to Apollo Global Management, an investment behemoth, along with Vistria Group and the Najafi Companies.   As part of its holdings, the school was a tiny portion of its portfolio. Barak Obama's close friend, Anthony Miller, was paid to be Board president.
Among national universities, UoPX is now ranked near the bottom in social mobility according to the Washington Monthly.
In January 2022, as a sign of its continued unraveling, Apollo Education appointed George Burnett, a former executive of three failed or predatory companies, including Alta College and Academic Partnerships, to be Phoenix's newest President.
UoPX's problems are a symptom of an economic system that despite the hype cares little about workers: a system that today looks at labor costs as something to be reduced--rather than an investment. With few exceptions, America's most powerful corporations: Amazon, Walmart, Target, Yum Brands, McDonalds--rely on low-wage labor and automation to make a huge profit. Companies in medicine, finance, and tech have smaller labor numbers--and while work may be lucrative at the moment, it's becoming more precarious.
*In the early 2010s, Apollo Group, Phoenix's former parent company, spent between $376 million and $655 million a year on ads and marketing.
Related link: Friends In High Places: Who Endorses America’s Troubled For-Profit Colleges? (David Halperin)
Related link: New University of Phoenix Head Ran College That Closed After Fraud Suit (David Halperin, Republic Report)
Related link: Bid to buy for-profit college by former Obama insiders raises questions (Michael Stratford and Kimberly Hefling, Politico).
Related link: Massive College Scams Taxpayers Out of Student Loans with Fake Enrollment Paperwork, Whistleblowers Say (Luke Rosiak,The Daily Caller)
Related link: The Slow-Motion Collapse of America’s Largest University
Related link: Can Apollo Global Management stem the bleeding at University of Phoenix?
Related link: University of Phoenix Collapse Kept from Public Scrutiny, As Ads Continue
Related link: Higher Learning Commission: Accreditation Is No Sign of Quality
Related link: Robocolleges and Robostudents
Related link: Guild Education
Dahn Shaulis at 8:58 AM
Share